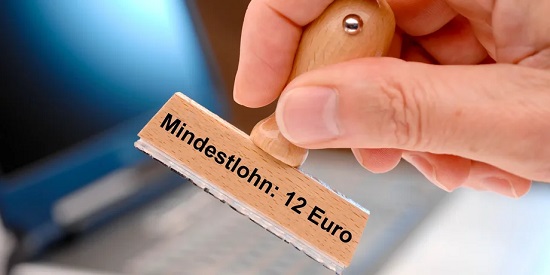 Germany’s new government is to raise the country's minimum wage to €12 per hour in October, following a strong campaign for a higher wage floor by the German Trade Union Confederation (DGB).

The increase of nearly 15% will benefit nearly 6.2 million low-paid workers – two thirds of them women – making up 10% of the country’s workforce and giving Germany the second-highest minimum wage in Europe after Luxembourg.

The rise – agreed as part of the coalition deal between the Social Democrat party (SPD), the Greens and the liberal Free Democratic Party (FDP) - will take place in two stages, from €9.82 to €10.45 on 1 July, and then to €12 on 1 October. It will also cover self-employed and flexible workers, and especially benefit people in the eastern German states. The measure will boost overall purchasing power in Germany by €4.8 billion, according to the DGB.

"The federal government is thus strengthening the bottom line in the wage structure," says DGB board member Stefan Körzell. "It is important that after this one-off intervention, the Minimum Wage Commission again decides on the amount of the minimum wage in future. Our trade unions are still primarily concerned with concluding good collective agreements in all sectors together with the employers.”