Today, activists set up ‘scales of justice’ in front of the Justus Lipsius building in Brussels to ask EU diplomats to guarantee justice for people harmed by companies’ human rights and environmental abuses, ahead of the Council meeting on draft due diligence rules. The action launched the ‘Justice is Everybody’s Business’ campaign by over 100+ civil society and trade union organisations for a strong EU law to hold business accountable for human rights and environmental violations. [1]

Claudia Saller, director at the European Coalition for Corporate Justice said: “The dominant business model of ‘profit is king’ is killing our present and our future. When people come together as a counterweight, we can tip the scales of power. Otherwise EU leaders will only hear what big corporate lobbies tell them.”

In February this year, the European Commission unveiled its proposal for an EU law requiring large companies to conduct checks on their investments and supply chains to identify, prevent and address human rights and environmental risks and impacts within and outside the EU. However, the proposal contains dangerous loopholes that will fail to prevent harm beyond the first tier of the supply chain and to strike down serious legal hurdles in bringing cases against companies causing harm.

The draft law also fails to oblige companies to reduce their greenhouse gas emissions and to hold them liable for failing to do so, despite their massive impact on the climate crisis.

Jill McArdle, corporate accountability campaigner at Friends of the Earth Europe said: “After a summer of droughts, heatwaves and fires, we are here to tell EU leaders that no amount of greenwashing can hide the new everyday reality of the climate crisis. Companies are one of the main contributors to climate change, and as such, must be obliged to reduce their emissions. But if they fail to do so, people must be able to take them to court.”

Today, the Council Working Party on Company Law is discussing the compromise text put forward by the Czech Presidency, which plans to limit company liability by creating an incentive for firms to cherry-pick which risks and impacts they can be held accountable for. This is a major cause for concern at a time of rising levels of abuse of labour and trade union rights by major European companies. [2]

The 3-metre tall ‘scales of justice’ began their balancing act at 10:00 am this morning in front of the Justus Lipsius building. Activists symbolically tipped the scales toward human rights, environmental and climate justice on the one side – and away from dirty profits on the other. [3]

Isabelle Schömann, Confederal Secretary at the ETUC said: “Our campaign begins at the heart of European decision-making, but it doesn’t stop here. The EU should take up its responsibility and set future worldwide standards for more corporate accountability, responsible business conduct and ensure better and free access to justice including for trade unions. We will support all actions across Europe that will end human rights, including trade union rights, violations.”

In a 2021 petition, more than half a million people and 700 civil society organisations from around the world expressed support for such an EU law. [5]

[1] The ‘Justice is Everybody's Business’ campaign is a coalition of civil society and trade union organisations from Europe and beyond. It is steered by CIDSE, the European Center for Constitutional and Human Rights (ECCHR), the European Coalition for Corporate Justice (ECCJ), the European Trade Union Confederation (ETUC), the Forum Citoyen pour la Responsabilité Sociale des Entreprises, and Friends of the Earth Europe. 104 organisations support the campaign. For more information about the “Justice is Everybody’s Business” campaign, visit: https://justice-business.org.

[2] Attacks on civil liberties like arbitrary arrests and detention of workers, along with limits on the right to assembly or to join a trade union, have reached an eight-year high during the pandemic, according to the 2021 Global Rights Index by the International Trade Union Confederation.

[3] The activists are volunteers from CIDSE, the European Center for Constitutional and Human Rights (ECCHR), the European Coalition for Corporate Justice (ECCJ), the European Trade Union Confederation (ETUC), the Forum Citoyen pour la Responsabilité Sociale des Entreprises, and Friends of the Earth Europe.

Total sample size was 16,906 adults. Fieldwork was undertaken between 14th – 29th September 2021. The survey was carried out online in Austria, Belgium, the Czech Republic, France, Germany, Ireland, the Netherlands, Slovenia and Spain. The figures have been weighted and are representative of adults (aged 18+).

[5] The petition collected submissions for a public consultation by the European Commission, which ended in February 2021. 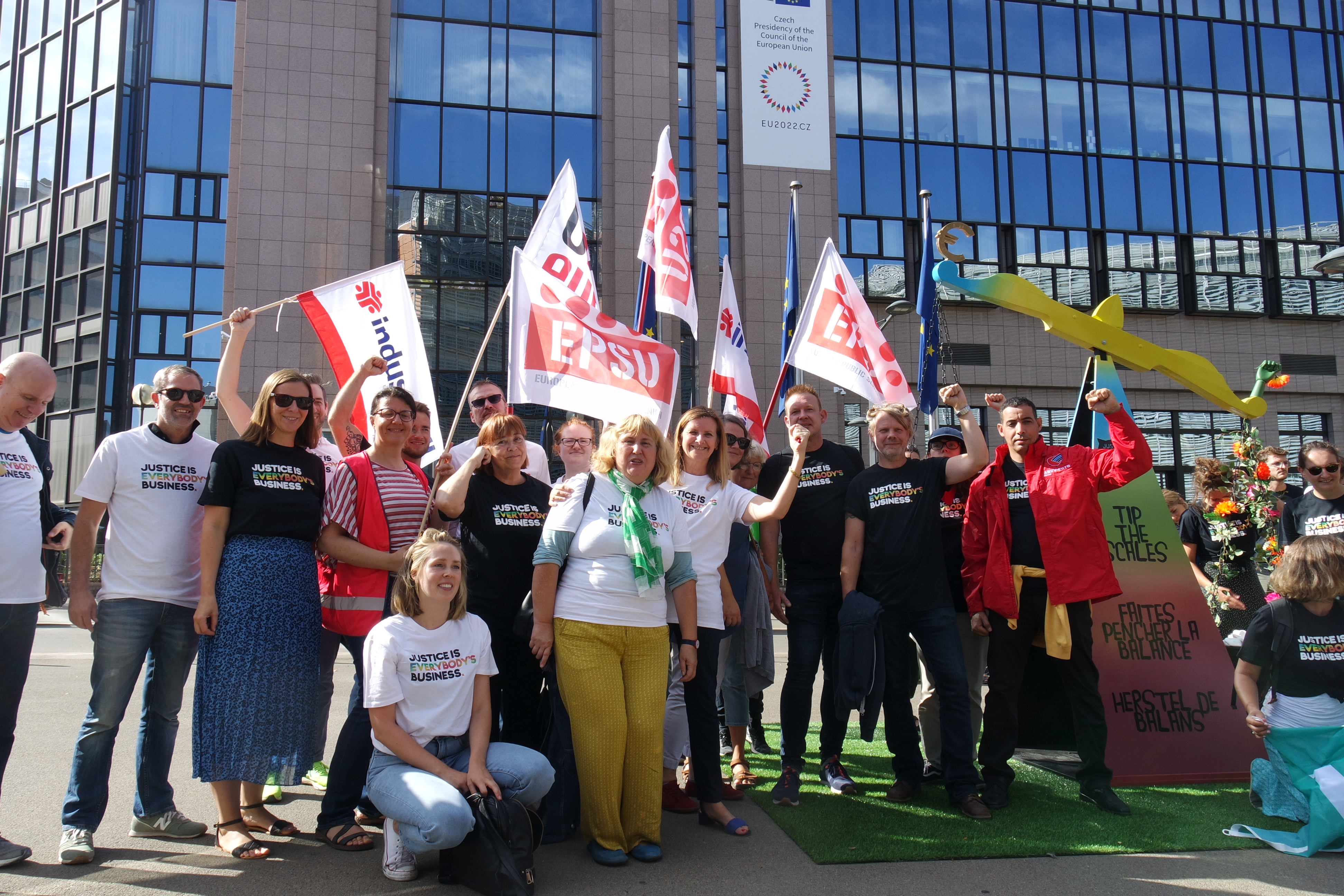 06.09.2022
Press release
In Due diligence and subcontracting
Print