Adopted Resolution: ETUC Response to the EU Commission Proposal for a Directive to Strengthen the application of the principle of equal pay for equal work or work of equal value between men and women through pay transparency and enforcement mechanisms 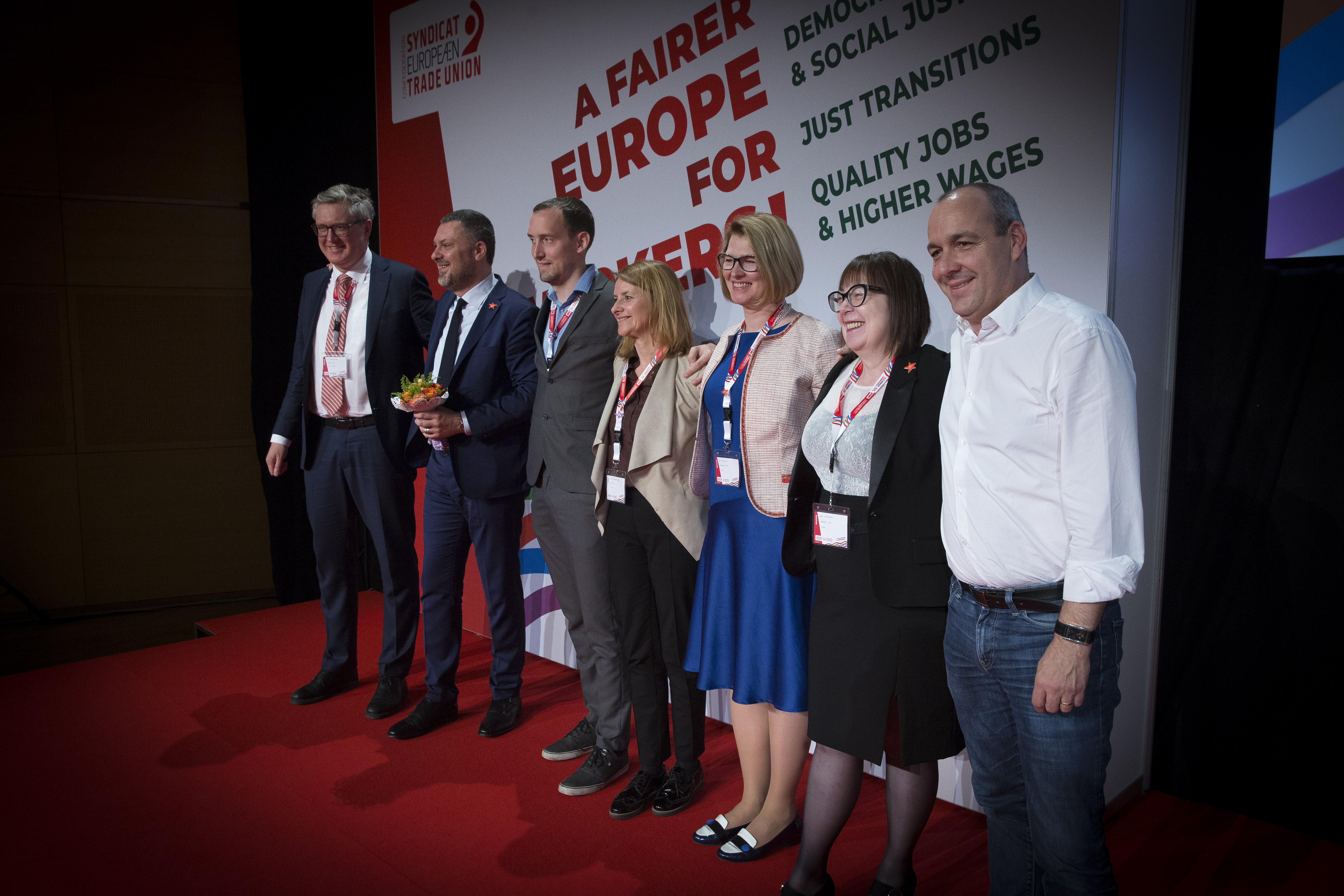 Adopted at the Executive Committee Meeting of 22 March 2021

Although there has been European law on equal pay for women and men for 45 years, the gender pay gap in the European Union is still unacceptably large at over 14%. At the current very slow rate of progress, pay equality will not be achieved across the European Union until the next century (2104) and will never be reached in some Member States.

The need for action is made more urgent as the impact of the coronavirus outbreak threatens to undermine what gender equality progress has been made. The legacy of Covid cannot be allowed to be less equal pay, particularly as the majority of essential and front-line workers are women. It cannot be acceptable, if it ever was, to refer to these workers as low skilled. They have proven just how essential they are to the enterprise, organisation, society and economy. Of the 49 million care workers in the EU, around 76% are women; women account for 82% of all cashiers in retail and 95% of workers in domestic cleaning and home help. The essential role played by these workers during the Covid pandemic calls for a systematic re-evaluation of their pay, so that their true contribution is properly valued and paid.

Pay Transparency as an enabling condition for pay justice

Two steps forward, one step back

The Directive does contain good principles and intentions that we can welcome. The Directive will give each worker, in both the public and private sectors, the right to get certain information about their pay and about pay in the organisation they work for, and employers are required to publish annual reports on the gender pay gap, and to take action to tackle the gap. The Directive will certainly help to reduce secrecy on pay and expose pay inequality. But while containing these good principles, the Directive does not do enough to be the game changer it needs to be. Instead, the proposed Directive puts a number of obstacles in the way of women workers securing the pay equality they deserve and are entitled to. The ETUC will campaign strongly to secure amendments to address the deficiencies.

Key priority 1: Guarantee that trade unions can be involved in job evaluation and guarantee the right of trade unions to bargain to close the pay gap.

Leaving women workers to fight the remaining gender pay gap on their own is a way to slow progress towards pay equality, not speed it up. Women workers need the defence of their union to bargain for pay equality. Therefore, the ETUC is also calling for an obligation on employers to agree with the trade union the job assessment criteria (Article 4 Equal work and work of equal value). This is essential to ensure that there is the opportunity to challenge any hidden bias in the criteria used by the employer to justify the pay of the different categories of workers in the organisation. It cannot be left to employers alone to determine this.

There is a welcome inclusion of a ‘hypothetical comparator’. This should be developed to ensure that a comparison is possible between the pay of jobs predominantly done by women, for example care, cleaning, and shop work and the pay of with different jobs in other sectors predominantly done by men, which require the same skills, qualifications, responsibilities, and risks.  This will be critical to the success of the initiative. The Directive does recognise this – as does existing EU law – but it proposes to allow employers to decide which jobs can be compared to each other for the purposes of equal pay, without creating an opportunity for trade unions to be involved in the job assessment or to challenge the assumptions behind the value accorded and the different pay levels given to the different jobs. It is naïve to think that leaving these decisions solely in the hands of the employer will bring about the type of change necessary.

Key priority 2: All companies regardless of their size should make reports and joint assessments.

The proposed Directive limits the requirement to report on pay gaps and carry out pay assessments and take measures to close pay gaps to organisations with over 250 workers (Article 8 Reporting on pay gap between female and male workers and Article 9 Joint pay assessment). This will mean that roughly 67% of all employees in the EU will be excluded. This limitation greatly undermines the value of the Directive for the majority of working women in the EU.  Moreover, it is an unnecessary limitation. For example, the impact assessment carried out by the Commission for the Directive shows that the cost of providing the report on pay gaps is estimated at ‘average cost between €315 and €500 per employer’ (p. 56). This threshold is also well below thresholds of transparency provisions in some Member States, for example in Belgium and in Portugal, where the provisions will apply to companies of 50 employees and over as of 2022. Moreover, the EU Treaty does not make a distinction between the right to pay equality based on the size of the employer.

The proposed Directive provides rights to individual workers to discuss their pay but only in very  limited circumstances (Article 7(5) Right to information). This undermines the operation of the pay transparency objective, namely to know what the pay differences are, as workers will be fearful that discussing their pay falls outside the legal space for disclosures. Article 7(6) could allow employers to prevent workers from sharing the information obtained with trade unions.

Article 8 requires employers to report on different pay gaps within the organisation, but not on the actual pay. This does not ensure sufficient transparency, especially as employers are able to decide what categories they will break the workforce into and to determine how the pay gaps are to be calculated within each category. The Directive should be changed to ensure that the employer must provide information on actual pay levels, broken by down by sex, for each category of worker and for the organisation as a whole. The information should be required to be provided on an annual basis (currently unspecified in the Directive).

Further concerns arise in the operation of data protection rules (Article 10, Data protection) on the restrictions on information in the pay audit. It is the case that data protection is often incorrectly raised by employers as a restriction on their pay transparency. It would appear that the Directive aims to confirm this incorrect approach. This is a major step backwards, the Directive should confirm the -non-application of GDPR to the achievements of the fundamental rights and legitimate interests of workers guaranteed by this Directive.

The Directive provides for grouped cases of several workers (Article 13 Procedures on behalf or in support of workers), but not class actions. For cases of equal pay for work of equal value, class actions are more suitable, as they reach all workers in the group, category or sector.

The Directive also provides that Member States may use their public contracts and concessions (Article 21, Equal pay matters in public contracts and concessions) to prohibit companies that have a gender pay gap of more than 5%, but this is restricted to employers with over 250 employees and with a gap of 5% for the same category of worker. This severely limits the effectiveness of this provision.

The ETUC will continue to work to secure the legal and collective bargaining framework to support the achievement of gender pay equality.

The ETUC will develop amendments and a lobbying strategy to achieve these, including briefing notes, thematic webinars, meetings with affiliates with MEPS, Perm Reps, Ministers and allies.

The ETUC will develop tools and projects to support trade unions to bargaining for pay equality.

A Working Group will be established, comprised of (at least) one member from each affiliate. The Working group will meet every second Monday, through English and on-line. Its mandate is to coordinate ETUC affiliates lobbying and campaigning actions as the Directive progresses.

A major action is anticipated for May 2021 aimed at counteracting the dangerous provisions on workers representatives and to secure in the Directive the crucial role for trade unions and collective bargaining as the main route to gender pay equality.

The ETUC will keep the ETUC Executive Committee informed of developments with the Women’s Committee involved in the ongoing progress.