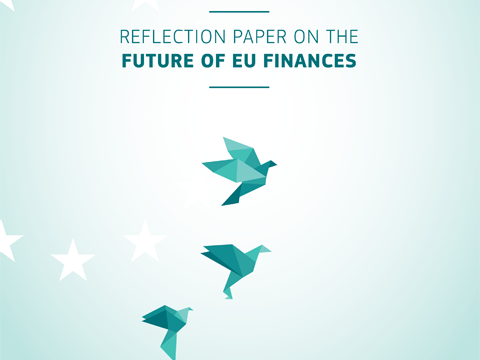 The Reflection Paper presents five scenarios for the future of European finances.

The first option is a linear extension of the present policy. This policy has led to low dynamics and high unemployment. Citizens are disappointed about the European project and emigration is rising in several Member States.

The second option is a return to a single-market concept, a retreat which might silence some opponents but is misdirected, given the new challenges that the EU is facing.

The third option is a Europe of different speeds. It is the revival of the idea of a core Europe and a periphery.

The fourth option is to do less but more efficiently. The Reflection Paper suggests giving up regional policy and parts of employment policy.

The fifth is “doing much more together” which would be rather difficult given the current mood of citizens and governments.

THE EUROPEAN PILLAR OF SOCIAL RIGHTS

We consider that this Reflection Paper does not reflect the Commission’s often stated wish for a more social Europe. On the contrary, the Commission seems determined to reduce the EU’s spending on social priorities and tackling regional inequalities and disparities. Despite the fact that the Reflection Paper states that the “differences of economic and social perspectives may create socio-political tensions and require an appropriate EU response so that no person and no region are left behind” (p. 16).

ETUC regrets the lack of importance given to social investment which we consider crucial for implementing the European Pillar of Social Rights.

Even worse is the assumption in the Reflection paper that “social spending does not have a high added-value”. We totally reject such a shocking assumption.

Currently, EU expenditure on social matters represents only 0,3% of total public expenditure in the EU.

The European Pillar of Social Rights implies social policies to be properly implemented and this needs proper financial resources. Consequently, the corresponding share for social expenditure in the EU budget (ESF) must be increased.

The ETUC underlines that economic, social and territorial cohesion must continue to be at the core of the European Union Strategy to be defined, thereby ensuring that all energy and capacities are mobilised and focused on implementing the strategy. There are still important differences of development between the regions within the EU as well as within Member States, hence the importance of the European Regional Development Funds (ERDF) and the Cohesion Fund (CF).

The EU cohesion policy is essential to support regional development, sustainable growth and quality employment. The General Regulation for the European Structural and Investments Funds post 2020 has to continue to strengthen these priorities.

The ETUC is calling for further investment in cohesion policy, which takes into account the need to make the labour market and the education system, as well as the social, health and housing sector more inclusive. Any of the five scenarios on the future of the European Union as outlined in the White Paper, even those focusing on doing less, must include Cohesion Policy as a central element.

Climate action (mitigation and adaptation), as well as other SDGs, must be integrated into all major EU spending programmes, in particular cohesion policy, regional development, energy, transport, research and innovation and the Common Agricultural Policy. Meanwhile, the transition towards a zero-carbon economy will lead to very specific challenges in some regions that must be tackled through cohesion policy and more broadly through a just transition.

Ensuring funding to manage the social consequences of decarbonisation must be a priority for the next MFF. In addition to just transition towards a low carbon economy, there must be targeted funding for managing digitalisation and automation effects on labour markets.

The European Globalisation Adjustment Fund (EGF) has to be reformed in order to cope with these new challenges and to ensure a direct access of social partners to funding. A combination of the ESF and the EGF should be ensured to face macroeconomic unemployment shocks, to implement active policies and allow in very exceptional circumstances the use of the funds for passive policies.

The Reflection Paper is based on the report “Future financing of the EU” presented by the High-Level Group on Own Resources in December 2016, three months before the White Paper was presented.

The ETUC calls for an increased EU budget for the period after 2020 and improved own resources.

We support the gradual introduction of new specific resources linked to the policies, namely:

As proposed by the High-Level Group on Own Resources, an in-depth reform of the revenue system is essential in order to make the future EU financing more stable, more sustainable and more predictable, while at the same time guaranteeing a higher level of transparency for EU citizens.

As rightly stressed by the reflection paper, own resources are also very efficient means to strengthen the EU action in many fields. For instance, an EU-wide carbon taxation (for sectors not covered by the EU Emissions Trading System) could accelerate the transition towards a zero-carbon economy.

It is necessary to create the conditions for an autonomous budget and the sources of financing of the EU budget should be reversed: more from new/additional own resources and less from Gross-national income-based resources.