ETUC Resolution on an Updated Proposal for a Social Progress Protocol 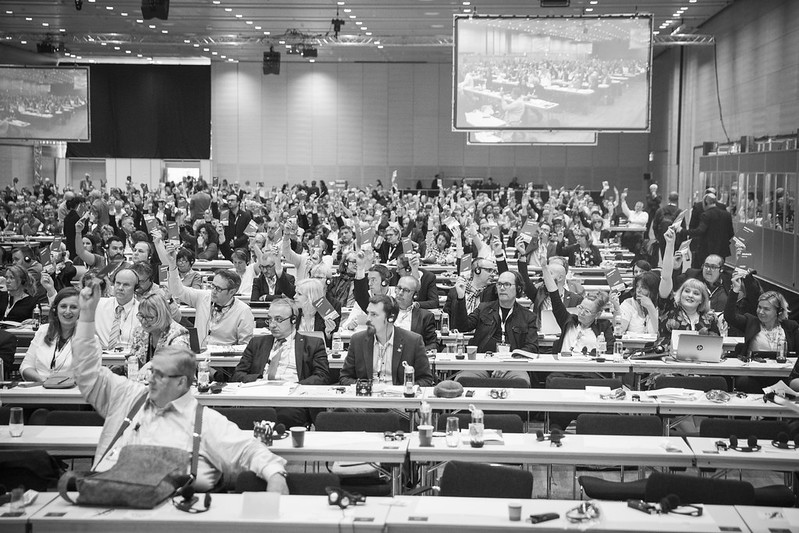 ETUC Resolution on an Updated Proposal for a Social Progress Protocol

At a time when human rights, rule of law and democracy are increasingly challenged, the European Union needs to reaffirm its commitment to these fundamental values, principles and objectives. At the same time, it is also high time the very foundations of the European project are scrutinised. Social Europe needs to lie at the heart of the ambition of an ever-closer Union.

However, there are limitations to what can be achieved under the current Treaties in this regard. Social progress cannot be guaranteed as long as people and labour risk being subject to the same market dynamics as other factors of production, allowing fundamental social rights to be compromised for the lowest price or the highest profit.

More than half a century of economic cooperation and integration has resulted in a European legal order founded on the primacy of economic freedoms. The devastating consequences of such a legal system guided by market forces rather than by human rights were notably manifested in the infamous Viking[1] and Laval[2] line of case law of the Court of Justice of the European Union. In a sequence of rulings, the Court held that workers’ and trade union rights constituted obstacles to the internal market. These fundamental social rights were consequently set aside, giving precedence to the unconditional exercise of economic freedoms.

The implementation, application and enforcement of EU law poses challenges not only for the European trade union movement in defending workers’ rights and decent working conditions. In fact, Member States are put in a position of conflicting obligations in their efforts to comply with EU law on the one hand, and European and international human rights standards, on the other. Notably, the European Court of Human Rights of the Council of Europe in its Holship[3] judgement has held that an economic freedom is not an equal right, but rather a factor in assessing whether interference with a fundamental right is proportionate.

While the Proclamation of the European Pillar of Social Rights in 2017 consolidated a political commitment to a more Social Europe, the constitutional imbalance in favour of economic freedoms at the expense of fundamental rights remains within the EU legal order. The entry into force of the Lisbon Treaty in 2009 elevated the Charter of Fundamental Rights of the European Union to the same legal status as the Treaties, but EU law continues to treat fundamental rights as exceptions to economic freedoms. Likewise, the European Union has still not acceded to the European Convention on Human Rights of the Council of Europe, despite its legal obligation anchored in the Lisbon Treaty.

It is crucial that the European Union becomes subject to external human rights scrutiny, in the same way as any other legal order founded on democracy and the rule of law. To ensure a coherent review of the compliance of EU law with human rights, including fundamental social rights, the Union should also accede to the European Social Charter of the Council of Europe.

Against this background, the European Trade Union Confederation reiterates its longstanding call for a Social Progress Protocol to be included in the Treaties. This safeguard should guarantee that fundamental social, workers’ and trade union rights take precedence over economic freedoms in the event of conflict. First elaborated in 2008 in the aftermath of the Viking and Laval rulings,[4] the ETUC has renewed its commitment towards this fundamental demand for Treaty reform at its Vienna Congress in 2019.[5]

The Conference on the Future of Europe initiated by the von der Leyen Commission in 2021 is a timely and important opportunity for European workers and trade unions to contribute to the debate on Europe’s challenges and priorities. The ETUC supports the approach that the Conference should also discuss the possibility of Treaty changes and places the Social Progress Protocol among its core demands for a more Social Europe.

In this context, the ETUC has embarked on elaborating an updated proposal for a Social Progress Protocol to better consolidate its demand in the current discussions. Whereas this proposal could be introduced in the Treaties in the form of either a protocol or a clause, emphasis is rather put on the substance than on the form of the proposal. It identifies social progress as a fundamental element of European social market economy, while recalling that the internal market is not an end in itself, but should serve the wellbeing of all people, including through the constant improvements of living and working conditions.

This ETUC proposal establishes the primacy of fundamental social, workers’ and trade union rights, not only in their interaction with economic freedoms, but also in relation to internal market, competition and any other Union policy measure, including but not limited to fields such as economic governance, trade, digitalisation and the environment. Finally, the proposal also safeguards and strengthens the autonomy of social partners, establishing a clear link with the respect and promotion of collective social rights. Enshrining the supremacy of fundamental rights in the Treaties is the key to unlocking a Europe where social progress prevails.

PROTOCOL ON SOCIAL PROGRESS IN THE EUROPEAN UNION

HAVING REGARD to the fundamental objective of social progress as established in Article 3(3) of the Treaty on European Union and Recital 3 of the Preamble of the Charter of Fundamental Rights of the European Union,

REAFFIRMING their commitment for the Union to accede, in accordance with Article 6(2) of the Treaty on European Union, to the European Convention for the Protection of Human Rights and Fundamental Freedoms,

WHEREAS, in accordance with Article 6(3) of the Treaty on European Union, fundamental rights, as guaranteed by the European Convention for the Protection of Human Rights and Fundamental Freedoms and as they result from the constitutional traditions common to the Member States, shall constitute general principles of the Union's law,

RECALLING that the internal market is a fundamental aspect of Union construction but that it is not an end in itself, as it should be used to serve the welfare of all, in accordance with the tradition of social progress including the constant improvements of living and working conditions,

RECOGNISING the need to give effect to Article 9 of the Treaty on the Functioning of the European Union, whereby the Union in defining and implementing its policies and activities, shall take into account requirements linked to the promotion of a high level of employment, the guarantee of adequate social protection, the fight against social exclusion, and a high level of education, training and protection of human health,

RECALLING that the Commission shall ensure the application of the Treaties, and of measures adopted by the institutions pursuant to them and shall oversee the application of Union law under the control of the Court of Justice of the European Union and that Member States are responsible for effective implementation of EU law and must adopt all measures necessary,

RECALLING that nothing in the Treaties, including this Protocol, prevents Member States or their social partners from adopting more favourable social measures. Nothing in this Protocol shall be interpreted as restricting or adversely affecting rights and principles as recognised, in their respective fields of application, by Union law or international law and by international agreements to which the Union or all the Member States are party, including the European Social Charter signed at Turin on 18 October 1961 and revised on 3 May 1996 as well as the relevant Conventions and Recommendations of the International Labour Organization and the respective case law,

HAVING IN MIND that, according to Article 151(1) of the Treaty on the Functioning of the European Union, the Union and the Member States shall have as their objectives improved living and working conditions, so as to make possible their harmonisation while the improvement is being maintained,

RECALLING that, according to Article 152(1) of the Treaty on the Functioning of the European Union, the Union recognises and promotes the role of social partners, taking into account the diversity of national systems, and will facilitate dialogue between the social partners, respecting their autonomy,

WISHING to emphasise the fundamental importance of social progress for obtaining and keeping the support of European citizens and workers for the European project,

DESIRING to lay down more precise provisions on the principle of social progress and its application;

The European social model is characterised by the indissoluble link between economic performance and social progress, in which a highly competitive social market economy is not an end in itself, but should be used to serve the wellbeing of all, in accordance with the tradition of social progress rooted in the history of Europe and confirmed in the Treaties.

Definition of social progress and its implementation

Social progress and its implementation means in particular:

The relation between fundamental social rights and other Union policies

To the end of ensuring social progress, the Union shall, if necessary, take action under the provisions of the Treaties, including under Article 352 of the Treaty on the Functioning of the European Union.

[4] ETUC Proposal for a Social Progress Protocol, adopted by the Executive Committee on 18 March 2008.