Fighting together for dignity and decent living standards 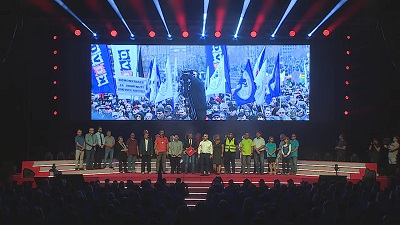 Around Europe, trade unions are calling for action to combat the astronomical rates of inflation that are putting food and energy bills beyond the reach of many workers.

In Czechia, for example, the trade unions within the ČMKOS federation have united to mobilise members in response to the current serious economic situation and its social impacts. The inflation rate, at 17.3% in July, is one of the highest in the EU. “It is impossible to continue to ignore the complex circumstances of families, employees, pensioners, single people as well as entrepreneurs,” says ČMKOS. A rally against poverty took place in Prague on 5 September, “to show together that the enormous drop in real incomes is unacceptable and that we want to live with dignity for honest work.”

In Italy, too, rising electricity and gas prices are threatening the national economy, putting household income and the survival of many companies at risk. “The emergency interventions in recent months have been positive but not sufficient," said CISL General Secretary Luigi Sbarra. “The government should urgently introduce new provisions to support workers and pensioners, families and businesses. We need immediate compensation and new solutions, with strict controls on speculators, limits on the European cost of importing gas but also a social ceiling on the national cost of electricity. At the same time, the price of energy produced through renewable sources must be detached from that of gas, encouraging the former.”

More than 1,500 Spanish trade unionists also rallied in Madrid, to support CC.OO and UGT demands for an increase in wages to counter the impact of inflation on workers' purchasing power.