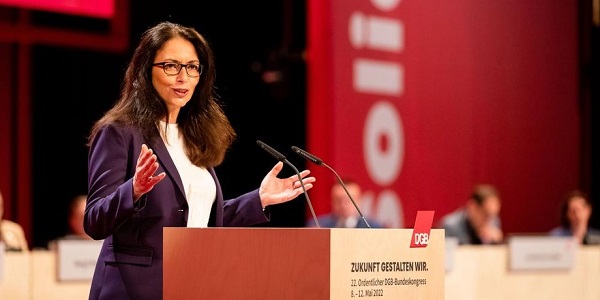 Yasmin Fahimi has been elected as the first-ever female president of the powerful German Trade Union Confederation (DGB).

She won 93.23% of votes at the annual congress of the organisation that brings together the country’s eight main sectoral unions, with 5.7 million members. She succeeds Rainer Hoffmann, who had held the post since 2014, and becomes the first-ever woman president in the DGB’s 73-year history.

The election is an important sign of the need for unions to focus action on female workers, who are more commonly found in low-wage, part-time work. Men still make up the majority of Germany’s unionised workforce (65.9% in 2020), whereas women comprise 50.6% of the German population.

“There won't be a long training period,” admitted Yasmin Fahimi. “Time is pressing for strong co-determination and a strong collective bargaining agreement. We are committed to fair distribution, good educational opportunities and good work.” Her message to young women? “Don't ever let yourself be distracted from your goals and passions! And the trade unions are the place where we make you strong.”