The ETUC is organising two events to drive home its message

Plus a Workshop in Rome on October 16 with MEP Sergio Cofferati and representatives of the Austrian Presidency and the Green and GUE groups in the European Parliament.

“The European Commission’s Company Law package delivers for business on company mobility, transfer of seats, mergers and divisions but seems to have forgotten that working people also need rights and protection” said Peter Scherrer, ETUC Deputy General Secretary. “It wants to make it easier to have online registration of companies but without setting appropriate minimum standards. That’s just encouraging  the establishment  of letterbox companies for the purposes of avoiding taxation and social security contributions.

“The company law package contains not one improvement of workplace democracy. There is nothing about workers representation in company boards across Europe, and this follows years of doing absolutely nothing about strengthening the European Works Council Directive.

“In the 1980s corporate governance shifted to the Thatcherite/Reaganite ideal of maximising shareholder value which led directly to the crash of 2008. After years of austerity and rampant inequality you would have thought we might be able to move to a more sustainable model of corporate governance including improved workers participation with European minimum requirements/standards.

“The European Commission has not been listening, but now we will make them hear.”

For more info on the 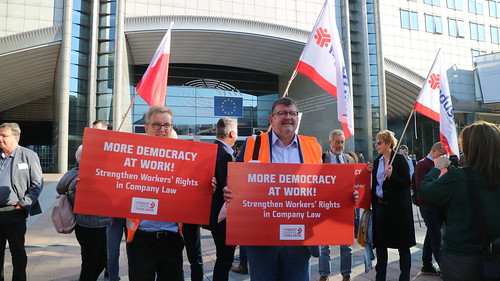