New Directive on workers’ rights must be adopted, transposed and implemented properly

The European Trade Union Confederation (ETUC) is calling for the adoption of the final agreement concluded last night by the three institutions, the EU Commission, the European Parliament and the Member States on Transparent and Predictable Working Conditions.

The Directive gives important rights such as reasonable notice about the work shift, and the right to be paid if work assignments are cancelled at short notice. The Directive restricts highly exploitative practices such as charging workers for the training they need to do the job and limits probation periods  6 months. Employers cannot stop workers from taking jobs with other companies outside the work schedule established with that employer.

All workers must be covered including on-demand workers, intermittent workers, voucher-based workers, platform workers, freelancers as well as paid trainees and apprentices.

Commenting on the agreement, ETUC Confederal Secretary Esther Lynch said “There are a number of meaningful advances in this Directive that will make a real difference to working people trapped in insecure work, but workers will find the rejection of many of the proposals made by the trade unions for more secure work extremely disappointing.

“One of the major advances is the change from a Directive that gives information to a Directive that offers protection.  Workers often fear that an employer will slash their hours if they ask for better conditions. If this Directive is transposed properly it should stop that type of abuse. Trade union representatives are also protected from adverse treatment if they organise to enforce the rights in the Directive.

Lynch highlighted three big disappointments for the ETUC in the new Directive. These are

The Directive states that social partners (employers and trade unions) should be included in the transposition of the Directive.

Lynch added “We call on Member States to listen to trade unions and to sit with employers and trade unions to discuss the transposition of the Directive to make sure there are no loopholes. There is no need or justification to wait for three years before giving workers these much needed rights.”

"We urge Member States not to use the option to exclude civil servants, public emergency services, the armed forces, police authorities, judges, prosecutors, investigators and other law enforcement services. And we warn Member States that this is not permission for a blanket exemption but must be based on objective criteria relating to the duties of the worker concerned." 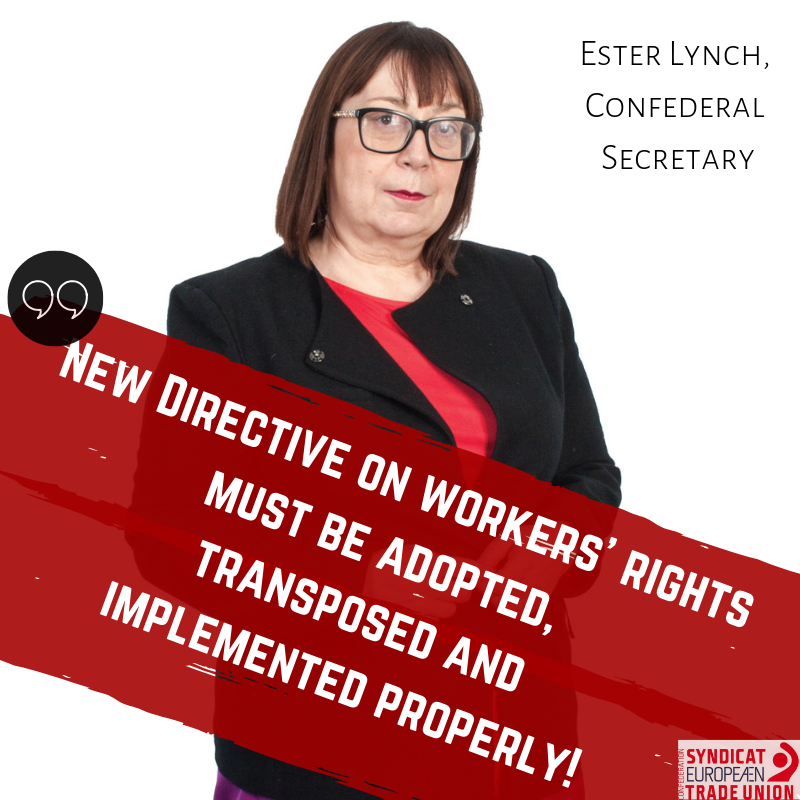