Deaths at work will continue to blight Europe for almost a decade longer than previously forecast after a rise in fatal accidents in almost half of member states, new trade union research reveals.

Fatal accidents at work are now projected to continue until 2062 based on the current rate – seven years longer than was previously expected.

The ETUC is calling on the EU and national governments to stop workplace deaths by backing its Zero Death at Work manifesto, which now has over 150 leading supporters including national ministers, MEPs, experts and trade union leaders.

Another 25,166 workplace deaths should be expected across Europe between 2021 and 2029 if fatal accidents continue at the same pace as during the previous decade.

Note: The table shows the findings of the forecast analysis for a selection of Member States, with the newly estimated zero death horizon and the number of deaths expected between 2021 and 2029. For instance, fatal accidents are now projected to end in 2124 in Italy - 82 years later than the previous forecast conducted last year. Forecast analyses have been conducted separately for each selected Member State, and for EU27 as a whole.

The figures are part of a forthcoming analysis of Eurostat data conducted by Pierre Bérastégui of the European Trade Union Institute and they are published as the ETUC today announces substantially increased support for its ‘Zero Death at Work’ campaign.

The Labour Ministers of Slovakia and Slovenia have now signed ETUC’s manifesto, taking the number of ministers supporting action needed to end deaths at work into double figures.

The ETUC plans to hand over a final manifesto with even more political support to EU institutions on Workers Memorial Day 2023.

“People go to work to earn a living but too many people in Europe are instead losing their lives to work. People’s parents, partners and children who go out to work and never come home because corners have been cut to save money or the law still allows unsafe working practices.

“Many lives have been saved through stronger safety legislation over the last few decades but our figures show that progress is coming to a halt in some countries and being completely reversed in others.

“The fact fatal workplace accidents are on the rise again across Europe shows should keep employers and politicians awake at night and shows we need to renew our commitment to keeping people safe at work.

“No one escapes death. But death at work is different. It is a fatal loss that could have been avoided. Ending these avoidable tragedies is absolutely possible with the right political will and we applaud the ministers and MEPs who have committed today to taking the steps necessary for zero death at work.”

ETUC manifesto for Zero Death At Work with full list of signatories https://www.etuc.org/en/publication/manifesto-zero-death-work 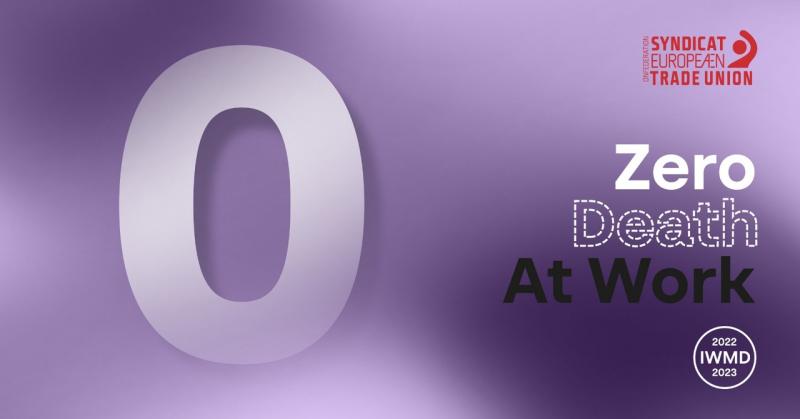