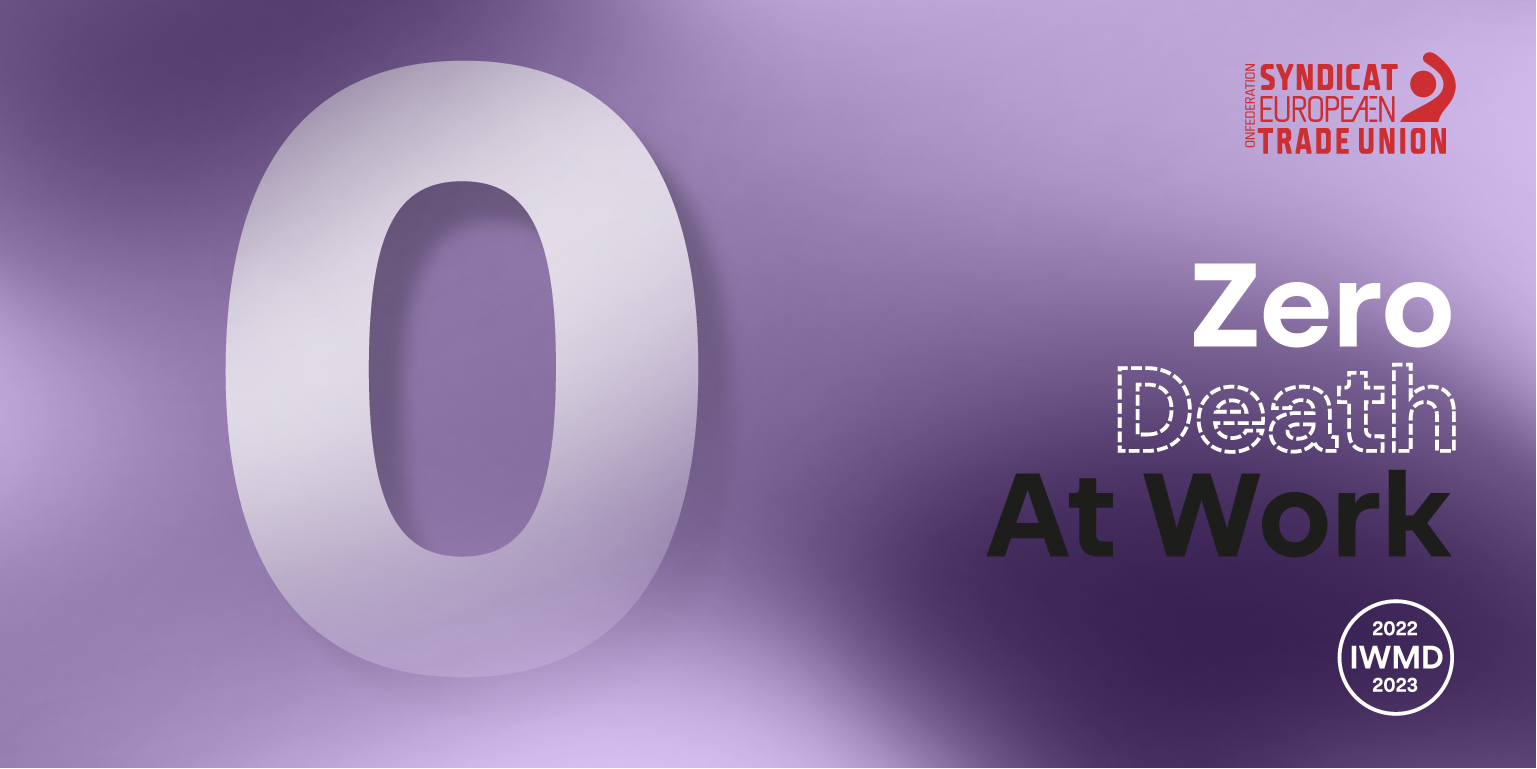 People go to work to make a living – to provide for themselves, their family and their loved ones.

Every working day across the European Union twelve working people do not come home from work - because they have died at work. Far from earning a living, work has killed them, and their families suffer emotionally, financially and in many other ways.

On International Workers Memorial Day and everyday, we remember those killed or injured at work – and we urge the European Union, member state governments and employers to bring an end to deaths at work. We call for zero death at work.

Zero death at work is not a utopian dream. The trend in fatal workplace accidents is down and eradication of fatal accidents is achievable.

But while fatal accidents are declining, occupational diseases are increasing. Some 100,000 workers die every year from occupational cancer due to exposure to hazardous substances. Long working hours and psychological pressure at work cause heart-disease, stroke, depression, and suicide. Bad posture, repetitive movement and heavy lifting cause backpain and other ‘musculoskeletal’ disorders and in turn cause depression and people being unable to work.

New challenges for health and safety are posed by extreme weather and temperatures from climate change, and new forms of work away from the traditional workplace such as rapidly increasing work from home and platform work. COVID has shown that the workplace is a major source of contagion, has led to the death of many thousands of workers, and we must be better prepared in work and elsewhere for future pandemics.

The EU’s current health and safety strategy says “All efforts must be deployed to reduce work-related deaths as much as possible, in line with a Vision Zero approach to work-related deaths”. This is good, but the actions promised in it will not achieve zero deaths.

We call on the European Union, its member state governments, and employers to genuinely commit, and take the actions needed, to achieve zero death at work. Europe needs much more to “walk the walk” than “talk the talk”.

This means a concerted joined-up effort to

This will require action at EU, national, sectoral and company level, with legislative as well as other initiatives involving trade unions and employers: including increased education, training, monitoring, prevention, protection, reporting, inspection, enforcement and penalties.

We expect and demand such action to be delivered by the next European Commission and European Parliament from 2024, in addition to the legislative action to be taken by the Commission in the current term. Zero deaths by 2030.

Georges Engel, Minister of Labour, Employment and the Social and Solidarity Economy, Luxembourg

Madalin-Cristian Vasilcoiu, State Secretary to the Minister for Labour and Solidarity Protection, Romania

Manon Aubry MEP, Co-President of the The Left Group, France

Vanessa Correia, International Relations and Greater Region Officer at LCGB and vice-president of the Joint European Secretariat of OGBL and LCGB (SECEC

Véronique Eischen, OGBL, member of the Executive Board and President of the Joint European Secretariat of the OGBL and LCGB (SECEC)

Diana Raitelaitienė, President, Lithuanian Federation of Forest and Wood Workers Trade Unions, and member of the Commission on Safety and Health at Work of the Republic of Lithuania, Lithuania

Päivi Niemi-Laine, President of the Trade Union for the Public and Welfare Sectors JHL, Finland

The Society of Occupational Medicine, UK

Dimosthenis A. Sarigiannis, Professor in Environment and Health, University of Thessaloniki, Greece