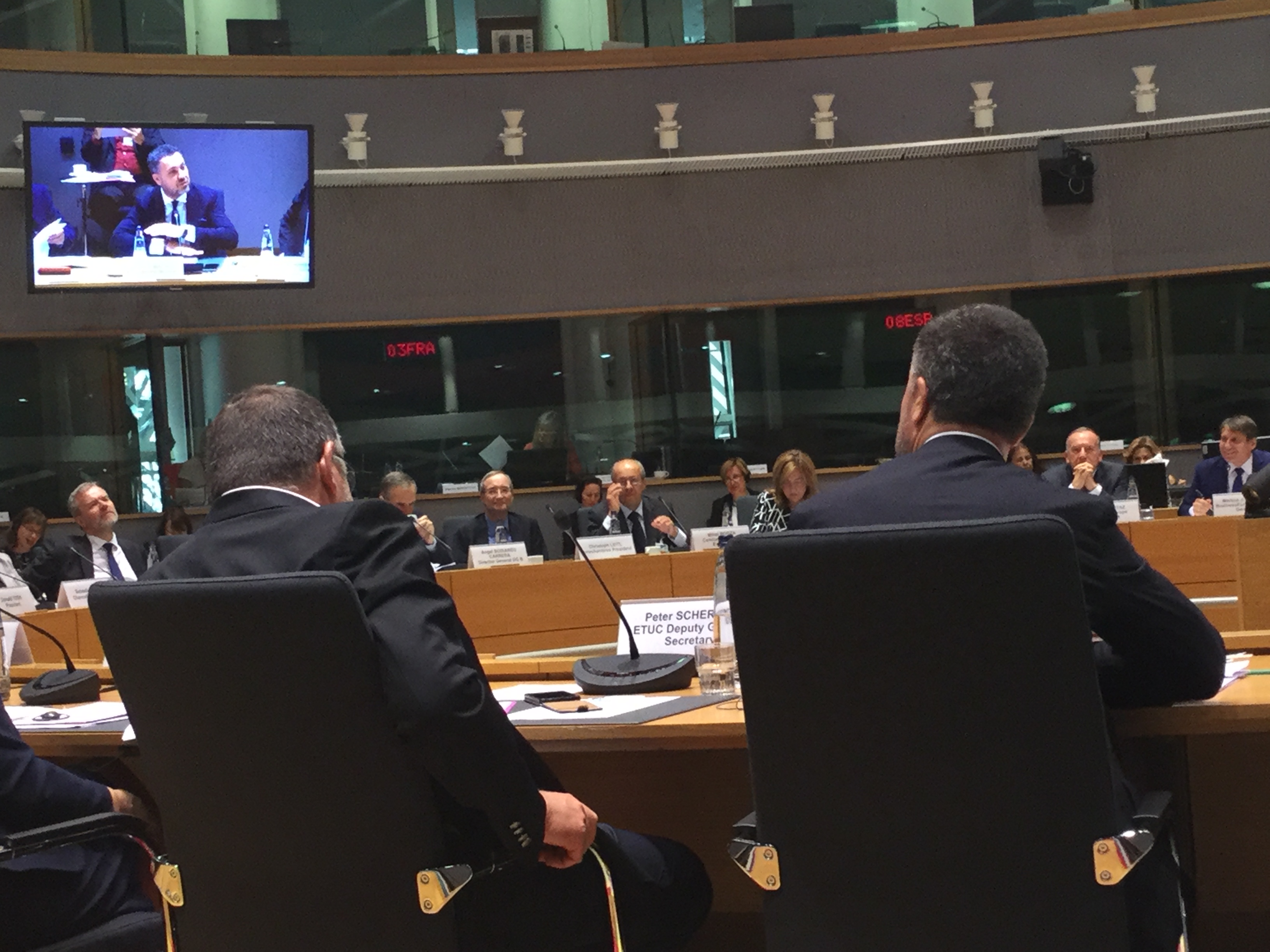 To be checked against delivery

The economic outlook shows slight structural recovery in Europe, with some improvements also in terms of employment.

Nevertheless, many analysts suggest that a new recession is likely to happen, while the social effects of the crisis and austerity are still there.

High levels of unemployment, especially among young people, together with precariousness and fragmentation in labour markets, as well as poor wages and social protection in the East and the South, generate rising inequalities, poverty and social exclusion.

This leads to sentiments of insecurity and mistrust among workers and the middle classes, contributing to anti-establishment and anti-European responses, and even to increasing racism and xenophobia.

It’s the responsibility of political leaders, but also of social partners and civil society organisations, to address this situation, by strengthening European democratic values, which are rooted in our social market economy and in our social model.

In this context, we as trade unions are very worried by the announced tightening of fiscal requirements for member states, which would go along with the end of quantitative easing by the ECB.

This would be a political disaster in the run-up to the European elections and would rapidly shut down what little slow growth we have had.

On the contrary, we think there is a need to extend the use of investment and flexibility clauses under the Stability and Growth Pact, to mobilise resources for massive job creation and for the implementation of the European Pillar of Social Rights.

And we appeal to leaders to be ambitious in reforming the Economic and Monetary Union before the European elections, by adopting measures for protection of investment and for support to social-friendly reforms, including tools addressing the impact of macroeconomic shocks on employment.

The European Semester 2019 starts in few days with great expectations for the implementation of the Social Pillar.

We need investments and reforms that bring tangible benefits to workers and citizens.

And we also need to improve significantly the involvement of social partners in the cycle.

Thanks to the Commission initiative, we have achieved a very effective participation at European level, but at national level the progress is still modest.

Governments don’t involve social partners in preparing national reforms, and when they do so, such involvement is very often purely formal or inappropriate.

Recommendations and rules for social partner involvement should be introduced.

Adequate resources for capacity building for social dialogue and industrial relations at national level are needed, given that the current provisions haven’t worked.

New tools should be introduced in the new Multiannual Financial Framework, particularly the ESF+.

Social partners are ready to discuss new forms of cooperation and support.

The new MFF should also address the most challenging phenomena that affect our labour markets: climate and energy change, digitalisation and automation, globalisation and international trade.

We need a just transition in which nobody is left behind – mobilising investment for quality job creation and supporting reskilling and lifelong learning.

We must make sure that for each job destroyed a quality job is created, and that new job opportunities are available to the younger generation, notably in the new sectors of the economy.

We must make sure that workers in the new economy are not exploited, that they can have the same rights and protection as others, that they can enjoy a decent salary, are free to join a union and have access to collective bargaining.

We must make sure that they are not second-class workers, whatever their employment status.

And they must not be played off against each other, by growing social dumping that is harming the cohesion of the single market and affecting honest employers through unfair competition.

These are the reasons why we are insisting so much on the need to implement the Social Pillar through concrete legislation to be finalised before the European elections.

It is vital that the legislative initiatives launched by the European Commission in the context of the Pillar are delivered.

We have had some successes recently: the revision of the Posting of Workers Directive and the legal framework on carcinogenic substances.

Now it’s time to speed up on Work Life Balance, on Transparent and Predictable Working Conditions, on Regulation 883, on Access to Social Protection, and last but not least on the European Labour Authority.

We know how many difficulties – technical, financial and political – stand in the way of achieving all this, but European workers deserve a level playing field of rights and protection, and they have been waiting for too long.

We all have to show coherence with the commitments we have solemnly proclaimed in Gothenburg 11 months ago.

We as social partners are proud to announce today that we will be doing our part, since last Friday we have reached a provisional agreement (to be approved by our respective constituencies) on the next work programme for social dialogue, which includes a clear commitment to negotiation in the crucial field of digitalisation.

I would really like to thank here all the colleagues who have negotiated hard on both sides: we have shown that social partners in Europe are able to deliver and ready to take their own responsibility.

Social dialogue can be relaunched – thanks to our willingness, to the Commission’s initiative of March 2015, and to the Quadripartite Declaration we have all agreed upon, including the Council.

Now we will propose to our colleagues from the employers’ organisations another step forward, to address the problem linked to wage developments in Europe, to the existing gaps between wages, productivity and living costs, particularly between East and West.

We are convinced that social partners together, in their full autonomy, are the best placed to address these issues successfully, by developing efficient industrial relations and collective bargaining, which can foster competitiveness and productivity, as well as equality and redistribution.

We will propose launching a discussion on a possible “partnership for industrial relations”, involving social partners at European and national level, with the support of the Commission and governments.

An open discussion that, we hope, can achieve successful results in the common interest.

Finally, let me conclude by mentioning two issues we are extremely worried about: Brexit and migration.

We hope that the Summit this week will show some light at the end of the tunnel of the Brexit negotiations.

We want to repeat here what we have already said in the EU-UK social partners’ declaration a few months ago: we need to safeguard the interests of companies and workers, whatever the final deal will be.

The only way to do so is not to harm the Good Friday Agreement for Ireland and ensure that the transition agreement with the UK preserves the status quo, the integrity of the single market and guarantees workers’ rights.

On migration, I appeal again to member states to show responsibility and solidarity in finding common solutions to the political crisis grown out of the refugee emergency, but at the same time to set up a credible migration policy for the European Union.

A policy that European companies and workers desperately need, based on skills and equal treatment, on integration and prosperity.

Our economy, labour markets and welfare systems have always benefited from the contribution of migrants, but to continue to benefit from this contribution requires a capacity of governance that the European Union seems to have lost.

Social partners have already shown themselves able to contribute to integration and inclusion of migrants through agreements and actions on the ground, but without the support of the institutions, especially Member States, we cannot be successful.

16.10.2018
Speech
In Social Europe
It is vital that the legislative initiatives launched by the European Commission in the context of the Pillar are delivered. We have had some successes recently: the revision of the Posting of Workers Directive and the legal framework on carcinogenic substances. Now it’s time to speed up on Work Life Balance, on Transparent and Predictable Working Conditions, on Regulation 883, on Access to Social Protection, and last but not least on the European Labour Authority.