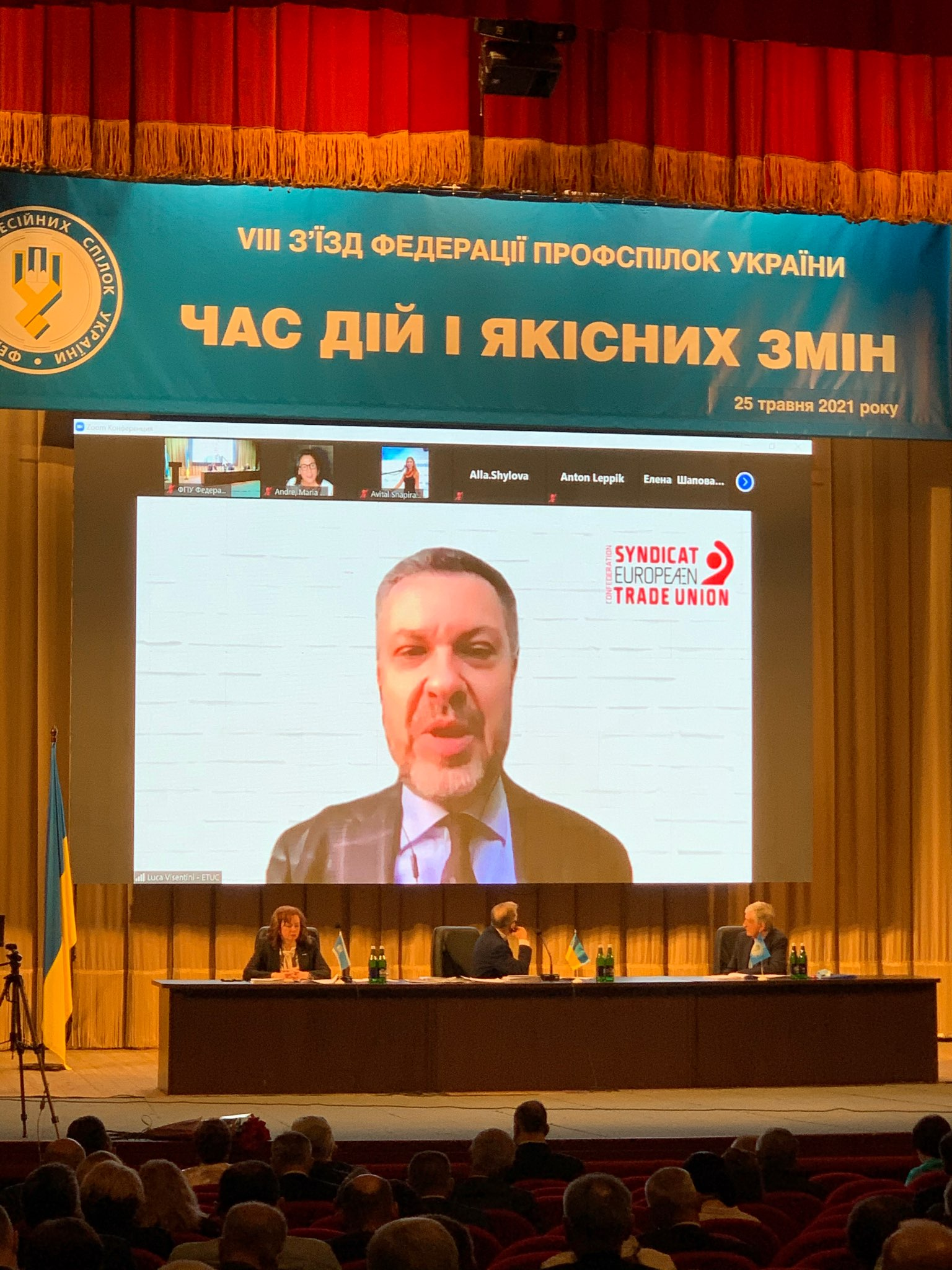 It is an honour to address the Congress of Federation of Trade Unions of Ukraine. We have a long history of cooperation, within the PERC, but also directly with the ETUC and in the framework of the EU-Ukraine cooperation processes.

Ukraine is an associated member of the EU through the Association agreement, it is an important EU trade and international partner, it nurtures EU aspirations, and these aspirations are welcome by the ETUC and PERC.

But Ukraine is a fragile state. Economically, politically, socially. It is undermined by the military conflict in the East, but the real causes of that fragility cannot be just written off by pointing to the external aggression. The societal problems are much deeper – and Ukrainian people clearly voiced them during the Revolution of Dignity: corruption, oligarchism, extreme inequalities, violation of freedoms and poor rule of law.

Successive Ukrainian governments seem to be blind or chose to be blind to these issues. They pray neo-liberal mantras, prioritise interests of elites over needs of population and they see trade unions as an enemy, just because you raise absolutely justified demands and questions, but also push forward alternative policies.

That is a grave mistake. Millions of Ukrainian people, especially youngsters, left the country in the search for decent life. Many risk exploitation, but they are ready to take the risks even being aware about them.

I visited Ukraine last year, right before the world was changed by the COVID, and it was a great pleasure and honour to be hosted by you and touch base on the real conditions and problems of working people and trade unions in your country. I met with many of you in the Trade Union Palace, symbol of the fight for the European future of Ukraine, the fight for dignity, freedom and democracy.

I also met authorities of different levels and made clear to them: Europe needs a strong Ukraine, but the strength is in the wellbeing and freedoms of its people, in democracy based on representation and control by citizens, and on social dialogue with the trade unions. Social dialogue is the key principle of the EU, and neo-liberal labour and anti-social reforms that the Ukrainian authorities implement are against European standards and values.

We joined you and other unions in a fight against deregulation of labour legislation last year, and you achieved some victories, but the fight is not over. There are other pieces of legislation that are clearly against labour interest and opposite to the European Union values, rule of law and social model:

We raise these issues with the EU institutions and the ILO, as well as with the Ukrainian authorities – with the government and Rada.  We deplore wage arrears and non-payment of wages – wage theft, disempowerment of labour inspectorates, systematic attempts to attack trade unions by initiating different legal procedures to alienate trade union property and undermine social dialogue.

We condemn the numerous violations of trade union rights by employers, and other misdoings that exist in Ukraine and that your union has been fighting against for years.

Now, again, another attack, you have brought to our attention last week, with the threaten against your organisation during the most important moment of democracy of a trade union, the Congress!

Gregori, colleagues and friends, be assured we will always continue supporting you in all these battles!

And we will also try our best to make sure that the results and successes for working people we will be able to achieve in the European Union, can have a positive impact also on Ukraine, and help you in your daily work in defence of labour interests.

We do have a challenging agenda in the European Union as you do in Ukraine. EU workers face enormous pressure because of COVID and its impact on our healthcare, our economies and our social protection systems.

But we also see that there is a better understanding by EU institutions that pursuing economic recovery after the pandemic without addressing the social dimension is a path to a disaster. The COVID crisis reinforced this thinking, there is increasing awareness that we need to make sure that everyone is given a decent opportunity, that nobody is left behind.

We are engaged in a set of important EU social dialogue and legislative initiatives.  We have just participated in a historical European Social Summit in Porto a couple of weeks ago, where social partners and EU institutions have paved the path for a sustainable recovery, for a reinforced European Social Model and for just transition.

We really hope that our work to promote workers’ rights and interests in Europe can benefit Ukraine and Ukrainian workers, building on the economic, trade and geopolitical cooperation that exists between the European Union and your country, but also by attaching social conditions to the resources that the EU is ready to spend in Ukraine.

Just to mention some of the initiatives we are working on:

There are many legislative initiatives we are working on at EU level, such as on Minimum Wages, Gender Pay Gap, Platform Work, Due Diligence, the Right to Disconnect and Telework.

In particular, the EU recovery strategy Next Generation EU, the European Green Deal and the European Pillar of Social Rights shall guide the EU external relations and we welcome their inclusion in EU-Ukraine cooperation.

The EU has been also providing important support to Ukraine to tackle COVID crisis, and we have to insist that that money shall fund public health services, social protection and income support for citizens, and that must be implemented in close dialogue with social partners to ensure that measures taken meet the needs of workers and businesses of all sizes.

We will continue monitoring such developments together with you, through the EU-Ukraine Association Agreement and the DCFTA’s implementation monitoring mechanisms, including civil society platforms and domestic advisory groups.

We have a lot in common, and we will continue our cooperation in the battles for workers’ rights and in the negotiations with employers and institutions.

Let me assure you that millions of ETUC and PERC members are joining you today, support your demands and your fight!

I wish you a successful Congress and fundamental decisions for the Ukrainian workers!

25.05.2021
Speech
In Russia and Eastern Europe
Europe needs a strong Ukraine, but the strength is in the wellbeing and freedoms of its people, in democracy based on representation and control by citizens, and on social dialogue with the trade unions. Social dialogue is the key principle of the EU, and neo-liberal labour and anti-social reforms that the Ukrainian authorities implement are against European standards and values.
Print