ETUC Mid-Term Conference - Speech from Rudy De Leeuw, ETUC President: Towards a Workers Europe and Sustainable Jobs for All 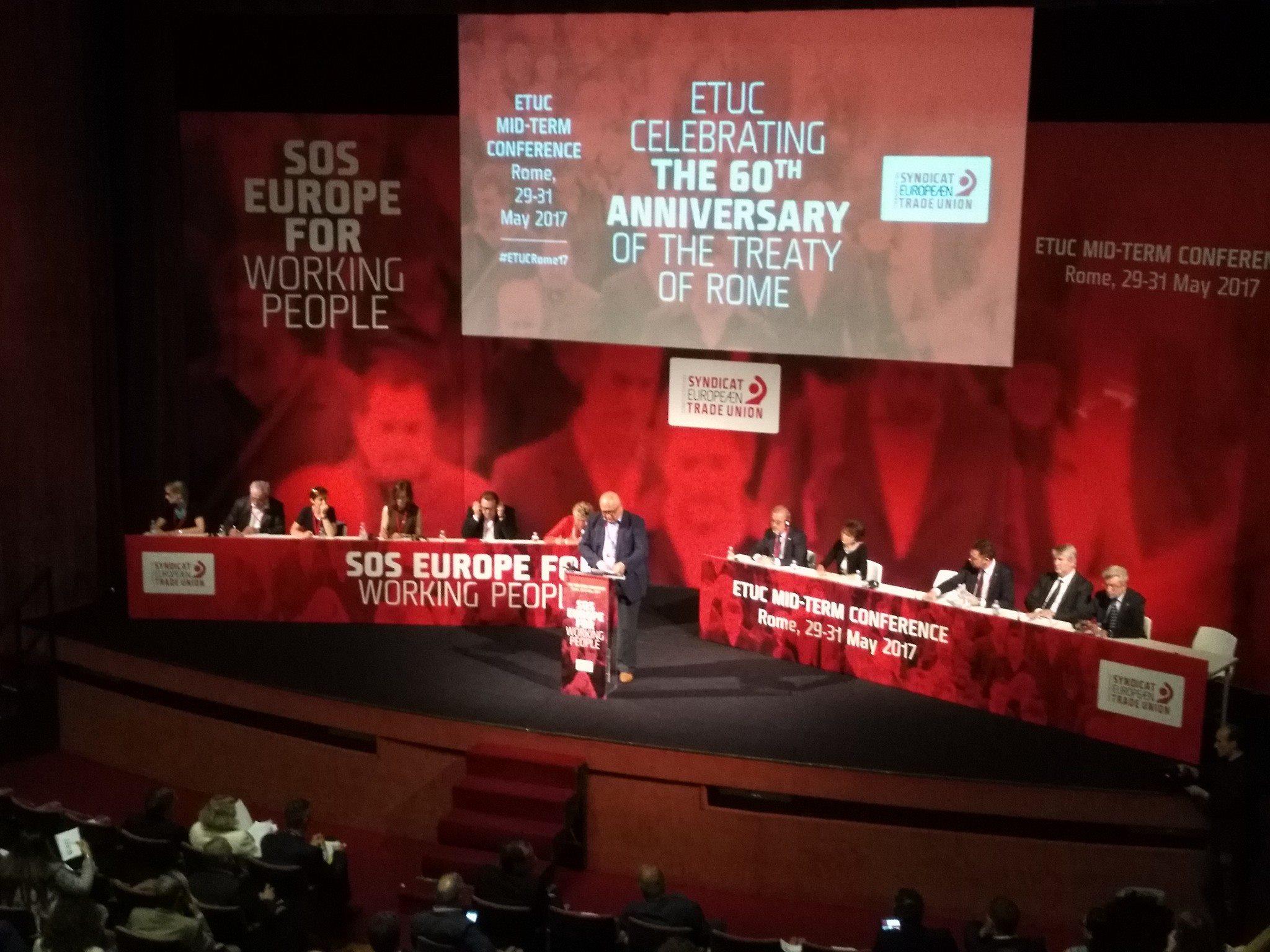 Welcome to this mid-term conference, which is intended to help us to get our heads up, look back over the road we have travelled, and to consolidate our positions in order to reach the goals we have set ourselves.

I would like to thank our Italian friends for hosting us here in Rome. It is not the first time, and it is definitely becoming a good habit. Rome is a whole facet of the culture to which all of us here belong as Europeans. And there cannot be genuine democracy without culture.

Democracy, deepening democracy as well as that of decision-making processes incorporating participation by the people, is certainly one of the major issues for the weeks, months and years ahead.

As we have reached a crossroads, we have a duty not to disappoint the workers, who have great expectations of Europe.

I take this opportunity to welcome the decision by the European Court of Justice which has ruled that the trade agreements negotiated with the European Union will need to be ratified by national and regional parliaments to be able to enter into force.

Never again should a Treaty be discussed in secret, without transparency and remote from democracy.

I strongly believe that the creation of a strong Europe, which necessarily means a social Europe, requires workers and citizens to be taken into account to a greater extent.

Here, I am thinking of all citizens, including those who leave their country to seek a better future in Europe.

In this regard, we will continue to remain very vigilant in relation to the policy pursued by the European institutions. I am thinking in particular about the unbearable agreement with Turkey; but let's be honest: it is also high time for every Member State to take a good look at itself, and some need to do that more than others ...

Democracy will also be a topic in our work here, because you will be adopting a position on the representation of women in our Congress, which is still not equal, which as democrats we need to put right, no?

The survival of democracy was also at the heart of the debate and the recent presidential election in France. Ultimately, democracy was the winner, but we are not immune from far right policies, which threaten the world of work.

When workers do not receive what they are entitled to because they are having austerity imposed on them, social inequalities increase and it does happen that some of them are won over by populist politicians.

However, these populists who want to be elected to bring about solutions to the crises that we are experiencing also mostly defend the socio-economic programmes of austerity that have already got us nowhere.

As we know, the best curb on extreme and/or populist tendencies would be a real, sustainable economy, which benefits everyone.

However, I repeat that Europe is part of the solution, not of the problem, on condition that it puts women and men - those in work or out of a job - back at the heart of its political project.

A project that offers a response to the social, economic as well as environmental concerns of our societies. Because there will be no jobs on a dead planet.

So what does the future hold for Europe? Are we bound to see a two-speed Europe? Should there be a parliamentary assembly for the euro zone? A large number of questions are being asked in the European public debate.

As far as we are concerned, we want to seize all the opportunities available to us for improving the situation of workers, and we will be in favour of any course of action that puts workers at the centre of the European social policy project.

So in my opinion, it is urgent to ensure that:

It is also high time for:

We will be devoting these two days of work to a major concern, i.e. our priority job as the European Trade Union Confederation: contributing to creating and keeping jobs. I would like to add sharing them too by reducing working time. I hope that will happen one day.

I am talking about jobs

The challenges raised by climate change, the energy transition, the circular economy, digital technologies, the 'sharing' economy, must be taken up via a fair transition strategy to support change, making sure that workers are not abandoned.

Rather than multinationals that are always whining about a need to cut their taxes and social security contributions, at the same time as privatising profits while passing on losses to society as a whole, we need entrepreneurs who are bold, innovative and who create quality jobs.

That is why we need, as a priority, to support businesses which are committed and bank on the development of a sustainable industry capable of making high value-added finished products and services.

Businesses that guarantee quality jobs, and which play the game of fair taxation, decent wages, social dialogue and optimum social protection for all workers.

Besides expectations of the private sector, the Juncker Plan, even if it is increased, with 500 billion by 2020, is well short of what is necessary to revitalise the European economy! ETUC wants a real boost and calls for a plan that is worthy of the name, with an additional investment target of 250 billion per year for ten years (=2% of European GDP).

Etuc would like to invest  primarily in public services, for example , in education and health, in mobility , in housing.

Quality jobs are also well-paid jobs, which can drive our economies, both national and European.

So it is essential to put an end once and for all to the wage dumping which puts everyone in competition with each other: countries, regions, companies and workers.

Moreover, the fight for decent minimum wages must continue, wherever unions are in favour of it.

Drawing on the model adopted by Belgian unions, I take this opportunity to argue in favour of automatic index-linking of wages to inflation, wherever possible.

And finally, we aspire to an enhanced social security system at every level: decent unemployment benefits and decent pensions, affordable, high-quality health care.

On a broader front, we want to improve the quality of life of workers and our trade union concerns go well beyond 'purchasing power' to acquire consumer goods.

Now, to finish on a matter of “popular” culture and legend, and I hope our Italian friends will agree with me: please don't forget to toss a coin in the Trevi Fountain to make sure that you come back to Rome.

I wish us highly successful work and conclusions which will fan the fire of social and trade union ardour in the interest of Europe's workers.

Let us always remember: through ETUC, we represent 45 million European workers. We are a countervailing power to be reckoned with, and we must continue to make sure we are respected.

The Europe that we are calling for cannot be built without the workers.

Together we are stronger: long live ETUC!